This is an original work

Frame : Not framed. Ask us about framing as displayed. 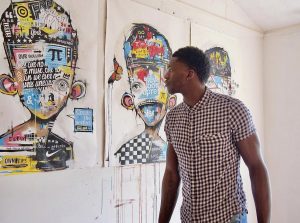 Nick George (b. 1982, Manchester, England) is a former professional athlete turned expressionist painter. He always had a passion for visual and performing arts as well as
basketball. He moved to Maryland, U.S.A as a teenager on a basketball scholarship where he attended Montrose Christian High School. He played Division I College
basketball at Virginia Commonwealth University in the Colonial Athletic conference CAA (Regular season and Tournament champion, CAA conference, 2004). He played
professionally in Spain, France, Switzerland and Italy. He also represented Great Britain in FIBA Eurobasket.

His travels across the world as an athlete have heavily influenced his art-making in distinctive ways, enabling him to investigate new ideas of culture and beauty.
George’s portraits, which are an amalgamation of people he has met through his journey, derive inspiration from abstraction, exploding in a flourish of colorful, exuberant
energy married with poetry and symbolism. The subject matter, like much of his work, references the black experience in Europe, his journey as an athlete, and his early
upbringing.

Nick’s works are found in collections across the United States, and Europe. His first group exhibition in 2021 occurred in June at Mitochondria Gallery in Houston, Texas. He
later made his debut in the United Kingdom, in August at the Chilli Art Project, London.

There are no reviews yet.

Be the first to review “The Arrival” Cancel reply