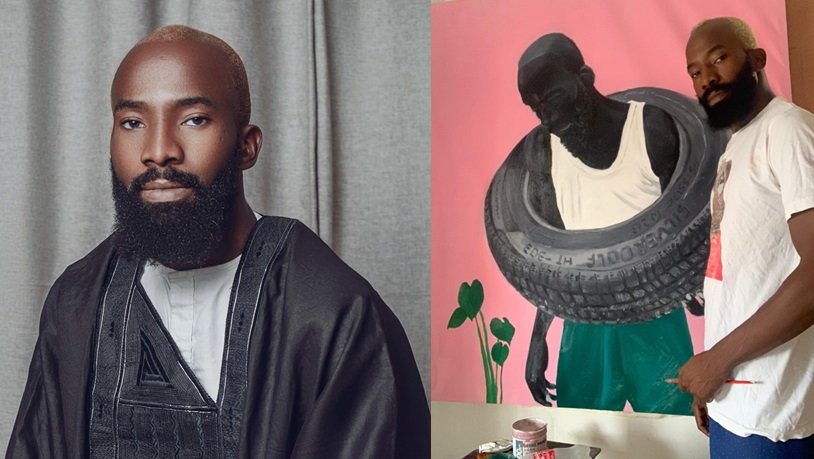 Can you tell us about yourself and why you became an Artist?

Hi my name is Matthew Eguavoen, I am based in Lagos, Nigeria. I am a contemporary artist. I got into art because it gives me joy, it gives me peace. Right from a very young age, I’ve loved drawing using graphite pencils. At some point I lost interest in painting, when I was in my final year in university, I ended up picking up the skill again.

A friend of mine sent me a painting of a very famous artist on Instagram. My friends name is Ikenna. When I saw the painting, it brought back memories of when I was a child drawing. So, I decided to pick it up again. I started with pencil, then pencil to charcoal, and now I am a painter.  It is a process for me, and I am glad I eventually did it.

Tell us a little bit about your painting style?

My style of painting is figurative painting, I work with oil and acrylic. I also create portraits. I enjoy portraits the most. I love capturing peoples faces in my work. I love capturing people’s expression in my work. I want the viewer to see and be able to tell what the muse is feeling. The demeanor should tell what my message is for that piece, that is what I love about portraits.

Talk to us about the works of yours that were selected for our Life in Color Exhibition?

I will start with jungle justice. I created that piece when there was a high rate of depression in the country, and all over the world. I wanted to represent somebody who is depressed. The piece is a portrait of myself, with a tire over my neck. In addition, it addresses the fact that we really don’t get justice in the country, when you are a “common man” and you don’t have money, you don’t get justice.

There is a saying about a poor man steals, and he loses his life, but when a Politician steal, they are praised. That is what I wanted to represent in that work.  Regarding depression we do not talk about it enough, so I wanted my work to also portray depression, loss of faith in oneself because the environment one finds themselves.

The boy with a clock represents a guy whose time is counting down. Society puts so much pressure on us youths to make it at 23, be a millionaire at 25, have your own wife and kids at 29. All those age metrics makes you work so hard you forget to live your life. This work depicts a young man who society has put so much pressure to make it at a certain age, and this pressure is leading him to depression.

What is your favorite color?

My favorite color is brown, it used to be green, but now its brown. Brown suits my skin, I am brown skinned, I am African, I like to represent Africanism, and Africa in my work.

What is your favorite medium?

My favorite medium are acrylic and oil. I love acrylic because its well known that acrylic dries fast. I like it when my paint dries fast, but I also don’t like it when my work dries fast. Sometimes I want to blend, and sometimes I’m busy, I’m in between works, and I want to come back to a particular work. If I’m working with oil, I can come back and create changes, sometimes major changes. If it is acrylic, by the time I get back I can’t blend, its already dry. There is a reason why I love acrylic, and there is a reason why I love acrylic.

Mitochondria Gallery specializes in art works from emerging and established artist from Africa and the diaspora, with the mission to educate, and expand the public awareness on contemporary arts from Africa.

Buy African art with the convenience of free shipping to the lower 48 states of the USA, and confidence with a certificate of authenticity.

Welcome to our newsletter subscription center. Sign Up to receive the latest news on our exhibitions, discover new artists, and artworks,